This week officially marks the end of winter training for our Hydrow Athletes in Miami, who will soon return to Boston and their home river of the Charles. So how is our team of Hydrow Athletes bidding farewell to Miami? With an impromptu triathlon, of course. Approximately 12 hours before the race was slated to begin, two teams of Hydrow Athletes decided that competing in the South Beach Triathlon would be the perfect swan song for their six-month stint in Miami. [caption id="attachment_8008" align="aligncenter" width="704"] 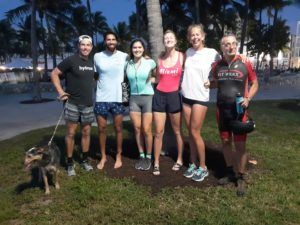 Pre-race jitters? Never hear of ‘em. Both teams post for a pre-race pic.[/caption] So what happens when two teams of elite rowers (and one very brave Technical Director) take on a triathlon at the eleventh hour? Spoiler alert: it ends well. Very well. Team “No Boats on Sundays” was comprised of Hydrow Athletes Dani, Sera and Grace, who tackled the swimming, cycling and running arms of the relay, respectively. The second team -- known simply as “Team Hydrow” -- had Hydrow Athlete Nick swimming, Hydrow’s Technical Director Chris cycling and Athlete James running. [caption id="attachment_8012" align="aligncenter" width="666"]

Nick, a nationally-ranked triathlete, returned to his roots competing in the swimming portion of the relay.[/caption] While both teams are no strangers to competition, triathlons are certainly not their typical area of expertise; apart from Nick, this was everyone’s first triathlon attempt -- and it paid off. Both teams earned first place in the female and male team categories. Not bad at all for their very first triathlon appearance! [caption id="attachment_8007" align="aligncenter" width="734"] 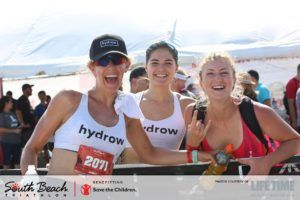 Grace, Sera and Dani are all smiles post-race.[/caption] Fitness, fun and a little bit of healthy competition? We can’t think of a more fitting way for our team to cap off their time in Miami. Congratulations to both teams on a job well done, and on being able to bring both medals and memories home with them to Boston. [caption id="attachment_8010" align="aligncenter" width="663"] 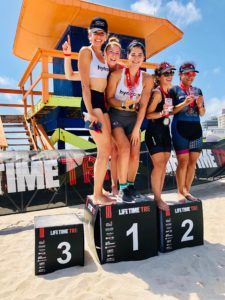 Team No Boats On Sundays[/caption] Want to keep up with our Hydrow Athletes? Follow us on Instagram at @hydrow_by_crew.