Rowing with Hydrow transports you from your home to the water… and with our growing collection of Hydrow Destinations, Hydrow allows you to explore like never before, even if you only have 20 minutes to spare.

Row Where We Go

When you’re an elite athlete, there’s no such thing as “off season.” Our Hydrow Athletes are no exception, and are on the water almost every single day of the year. When the New England winter temperatures turn the Charles into a tundra, our Athletes head south for the warmer waters of Miami Beach, bringing the Hydrow community right along with them.

But it’s not just about rowing on our home rivers -- Hydrow Destinations takes you to new and exciting locations, including those where rowing isn’t necessarily the norm. So far, Hydrow Athletes have filmed on the Thames in London, in the Scottish Highlands, up and down the coast of California, in Boca Raton and Naples, on Lake Winnipesaukee in New Hampshire, in Essex -- they even took a spin around the Statue of Liberty, and down the East River right by Yankee Stadium.

With ongoing plans to roll out new and exciting locations, you can look forward to exploring the waterways of countless places, all around the globe.

Dolphins and ferries and jetskis… oh my!

Thanks to our Live Outdoor Reality (LOR) technology, you’re getting more than just a picturesque backdrop to row against. Each row is filmed from the vantage point of the boat, allowing you to take in every panoramic view exactly as you would if you were on the water.

And because Hydrow workouts are filmed live daily, you’ll see exactly what our team sees, including the unexpected. Keep your eyes peeled for cameos from the local wildlife, on-river traffic and the occasional unexpected wake. There’s never a dull moment on the water with Hydrow -- and you’ll be there for every stroke -- and splash -- along the way.

In addition to the extensive library of Athlete-led episodes, Hydrow also offers a different approach to exploring new places. Hydrow Journeys give you the opportunity to row through different scenic locations without the guidance of an Athlete. Row at your own pace, and take in the sights, sounds and sensations of being on the water. With nothing but the sound of your oars hitting the water, and the peaceful background nature noises, Journeys are a perfect low impact workout for both body and mind. 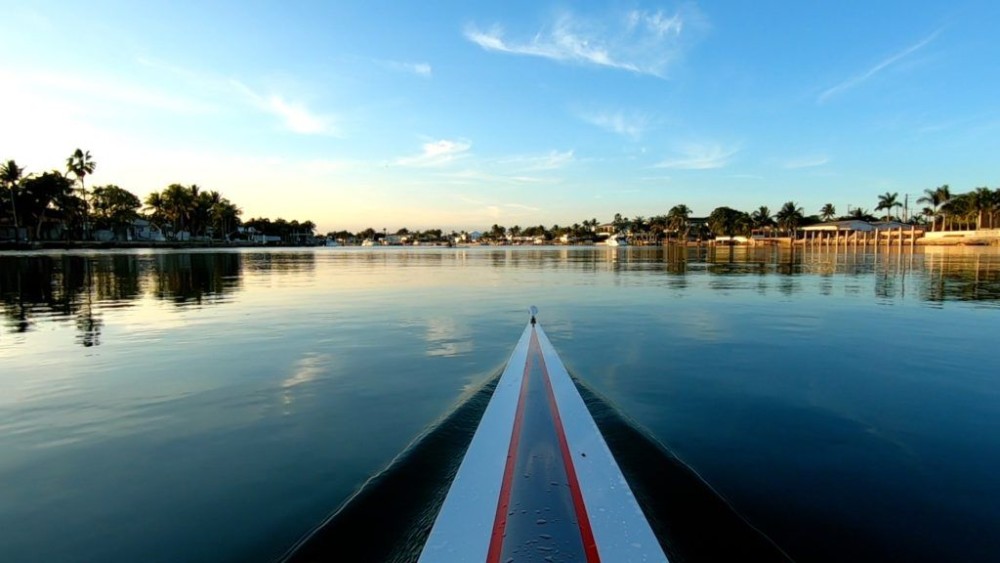 Enjoy an unguided sunset row down Indian Creek in Miami with Hydrow Journeys. Have ideas on where we should head next? Use the tag #HydrowDestinations to share your dream locales for future trips on social media!