For Meg Evans and Brian K. White, racking up meters on Hydrow wasn’t just a way to exercise indoors; it was a new activity that they could do together.

“I used to always work out at lunch,” Brian says. “I had 60 minutes, and I was in a gigantic hurry. Get out of the office – which luckily was walking distance from the gym – get changed, work out for 45 minutes max, get showered up, and get back to the office, all in an hour’s time.”

“Now, the gym's in our basement. It's more relaxing, and in an hour we can do 30 minutes of intervals each with no big rush. That makes it so much more enjoyable.”

The couple sat down recently with Hydrow Athlete Mike Dostal to discuss community, encouraging one another, and logging millions of meters along the way.

“It’s something we can do together”

“I don't know that I would even have gotten into rowing if I had to do it by myself,” Meg says. “I probably would not even have given it a second thought. Like Brian mentioned, it was something that we could do together, so that was how we got started, when our kids were away at university.”

The couple was already rowing outdoors and owns a double scull (two-person boat); they originally picked up Hydrow in December 2019 as a way to combat cold Ohio winters.

“We got into rowing because it's something you can do together,” says Brian. “But with Hydrow, we can take turns and encourage one another. On Monday for example, we were taking turns doing intervals. I did 10 minutes of intervals, then she did 10, I did 10, she did 10, and so on. You get support and also encouragement from the person you love.”

“Yeah, I was surprised too to get so much more fit. I wasn't expecting that,” adds Meg. “I was thinking, well, it'll just keep me fit over the winter, but I actually improved my fitness a lot more than I was expecting.” 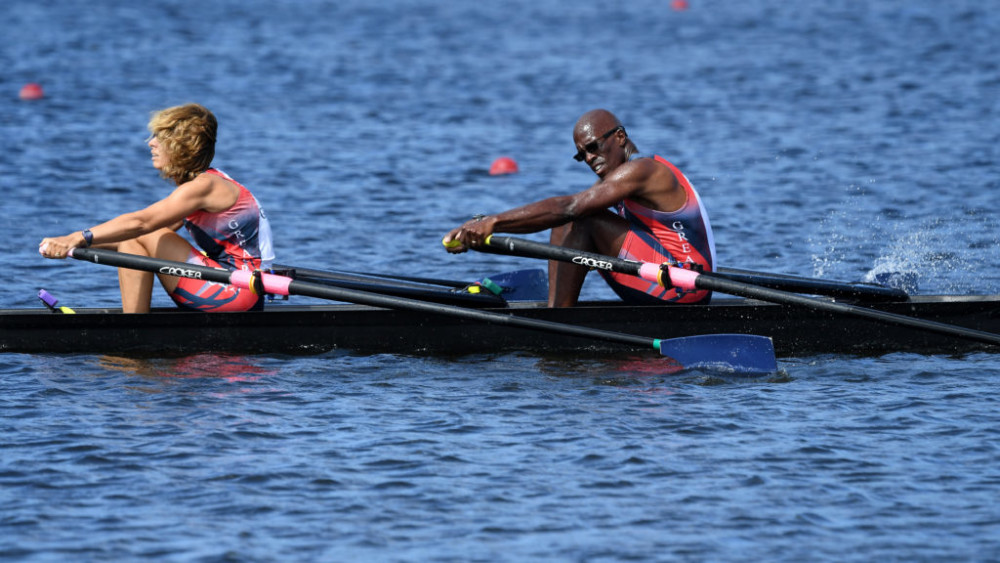 “The water’s always flat on Hydrow”

“It took us a while to try a Live Row,” Brian notes. “The first one we did was with Mac and she was in Miami. I remember the beautiful, green water. Meanwhile, it was 22 degrees outside here in Ohio with three inches of snow on the ground. Being able to virtually be in Miami Beach just made things so much better.”

Although the couple rows on water as well, they were pleasantly surprised at how Hydrow can deliver that outdoor experience without having to brave the elements.

“We row on water as well, but here’s the thing: the water is always flat on Hydrow,” Brian says. “There is never any wind or white caps, and sometimes on the water you have to abandon your form and focus on just surviving and staying dry. With Hydrow, I don’t have to worry about those things and can concentrate on my workout every time, and I’ve really seen some speed improvements.”

“We love the Live Rows because there's no telling what might happen,” says Meg. “There’s always a surprise in store. Recently Dani was saying she almost got dumped by a manatee that came up suddenly.”

The couple notes that they’re taking advantage of work-from-home life as much as they can before things open back up.

“I presume in the not-too-distant future I'm going to have to go back to work and actually stop working from home,” notes Brian. “So every time a new live schedule goes up, I try to arrange my schedule to make the Live Rows. I want to get them in while I can.”

“You’ve got to enjoy it. Because who knows where we're going to be three or six months from now? I'll just be at my desk, thinking, ‘Dang, this time last year, I was taking a break rowing right around this time.’”

“You guys have logged so many meters. How many again is it?” he asks.

“I just went over four million recently, and you gave me a very nice shout-out for it on a Live Row, Mike!” says Meg.

“And I went over nine million a few weeks ago, and I'm right around nine and a half million now,” says Brian. “Together we’ve got around 13.7 million on the rower, which I think is the most on any rower, and we have had no problems out of that 13.7 million meters. No breakdowns, no issues, just a new seat we decided to order along the way.”

The couple notes that, while supporting one another is a great motivator, the community also makes a huge difference.

“Hearing Athletes announce milestones on the Live Rows is great. I always join five minutes ahead to hear the milestones, and at the end of the row I try and go through and comment and tell people congratulations. For the early milestones especially, the 100K and 250K milestones, it’s almost like those are harder because you’re establishing a new healthy habit that previously wasn’t there. It’s something to be saluted because that's really hard to do.”

The couple also says the Athletes’ personalities help to bring the energy.

“Having it Athlete-led, you guys bring the energy,” Brian notes. “Some days it's like 7pm, you’ve had a long day at work. You sit down on Hydrow, and the Athlete’s energy is so good that it actually melts your stress away and makes you forget about your day.” 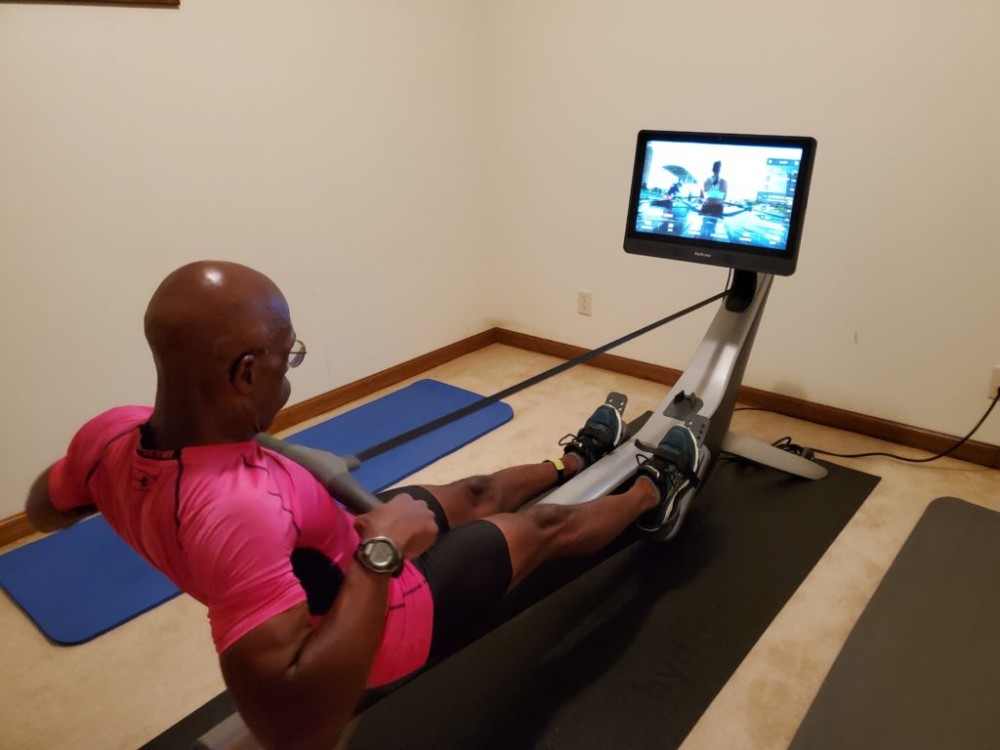 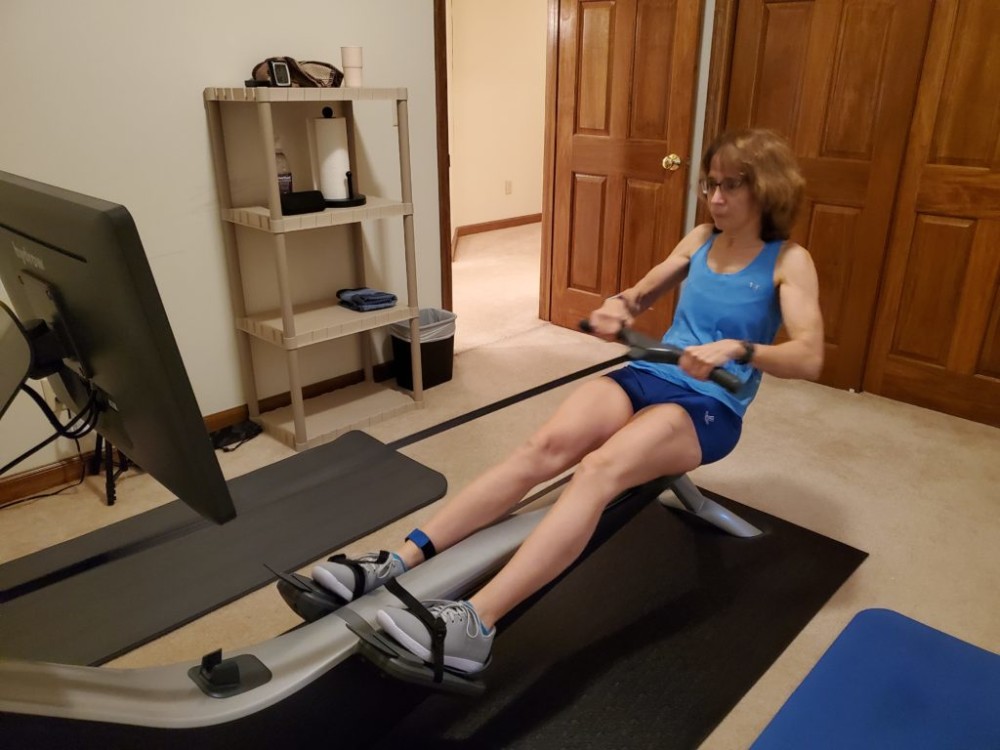 And check out a few of our other Behind The Oar member stories here, here, here and here.