For Mara and Robert Johnson, the arrival of the pandemic meant finding new sports that were both engaging and safe.

“Mara has Down syndrome and has been participating in the Special Olympics since she was 15,” her father Robert says. “What sports do you play, Mara?”

“She also swims. And I've been doing CrossFit for about ten years,” notes Robert. “When the pandemic hit, I kind of fell into CrossFit withdrawal. I wasn't sleeping well and was kind of restless. When I came across Hydrow, I liked the beauty of the machine, the people behind it, and the concept. So we ordered one.”

Robert notes that rushing back to gym life wasn’t going to be an option anyway.

“With Down syndrome, there can be a risk of decreased immune functioning, so we wanted to make sure that Mara was safe,” he says. “Most gyms were closed for those first several months, but even when they reopened, being in an enclosed space with a lot of sweaty, fast-breathing people didn’t seem like a good idea.”

Since getting Hydrow, Mara has found a new groove. The family sat down with Hydrow athlete Sera Moon Busse to chat about the community, staying inspired, and joining the Million Meter Club.

“So we’re all on the same page, can you describe for us a bit about how the Special Olympics works?” asks Sera Moon.

“Sure,” says Robert. “The Special Olympics is for young people with either physical or mental handicaps. The organisation accommodates all different levels of ability and they cover a broad spectrum. In swimming, for example, some athletes participate in float races, whereas others are on their high school’s varsity swim team back home.”

“There are a lot of similarities between the Special Olympics and Hydrow, actually. Part of what makes the Special Olympics attractive to athletes is that there’s a big community piece, a social piece, and opportunities for interaction. There's good coaching too, the workouts themselves, getting fit, getting strong. Athletes like feeling good about their bodies. They also love healthy competition.”

Robert also notes that the variety of the Hydrow programming not only keeps you interested, but also helps you make continued gains over time.

“It's not enough for someone to walk into a gym and jump on a treadmill or go out in your garage and start doing bicep curls,” Robert notes. “That's boring as heck, so most people aren't going to stay with it. You also plateau really quickly.”

Mara nods in agreement enthusiastically. The two are wearing their matching Million Meter Club shirts for the interview.

“The fact that we can mix things up a lot, whether it's the Special Olympics or Hydrow, it creates this very sticky, engaging, motivating experience. That’s really important for special needs athletes. Mara has been able to sustain this for up to a million meters and join the Million Meter Club in under a year; it’s unbelievable.” 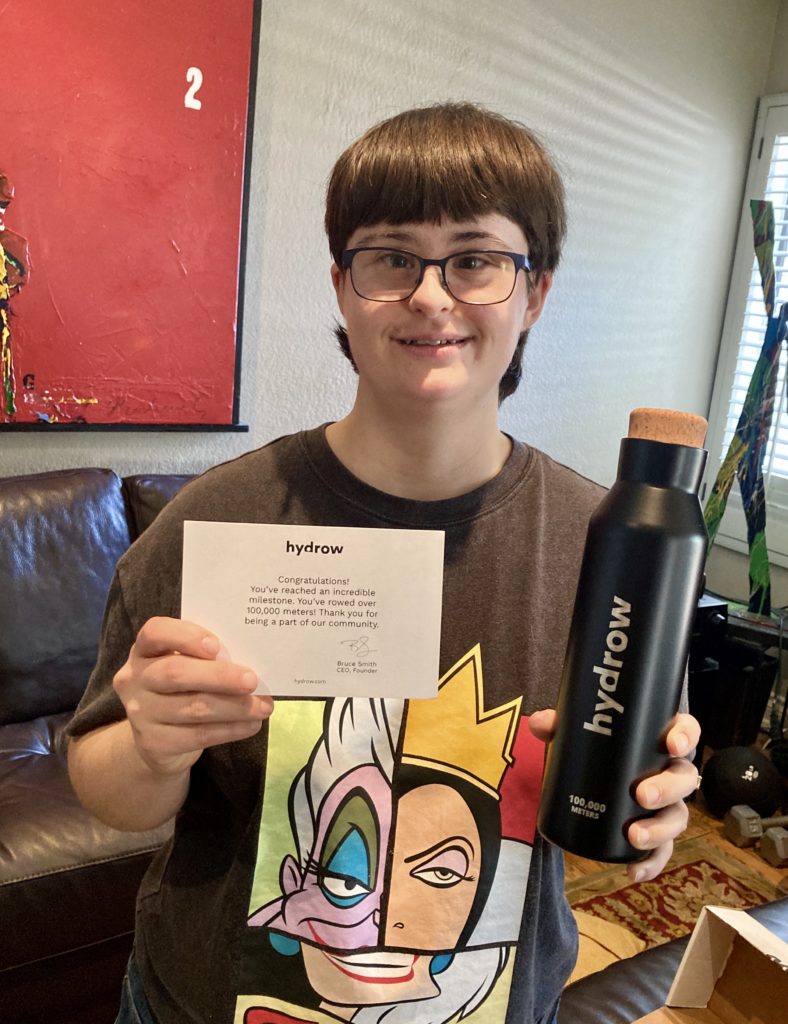 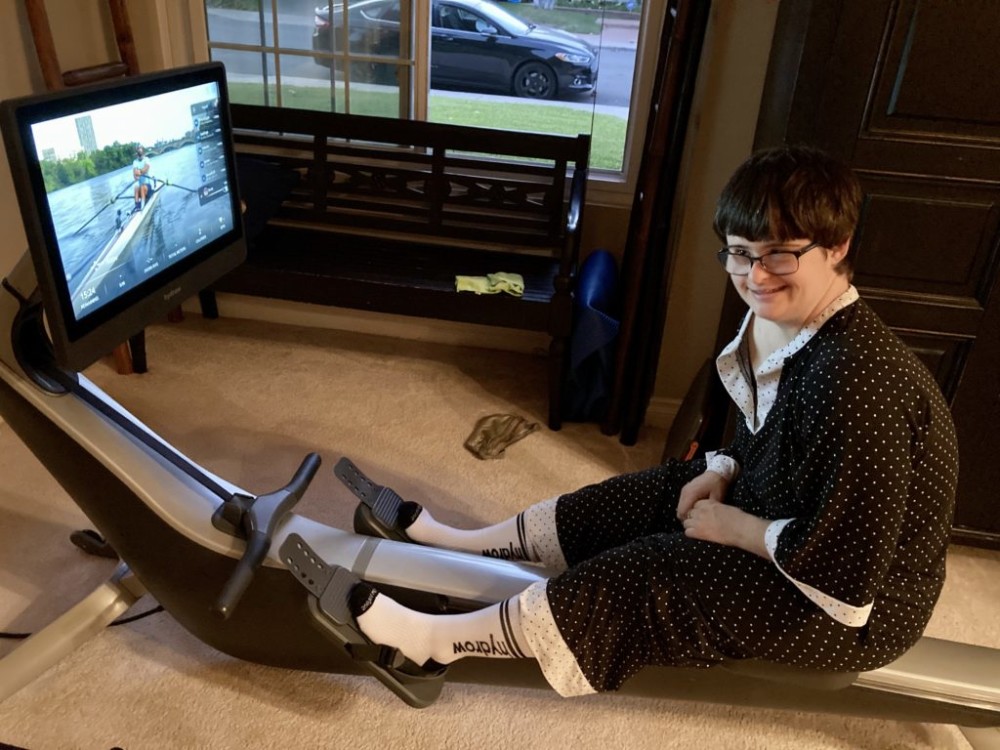 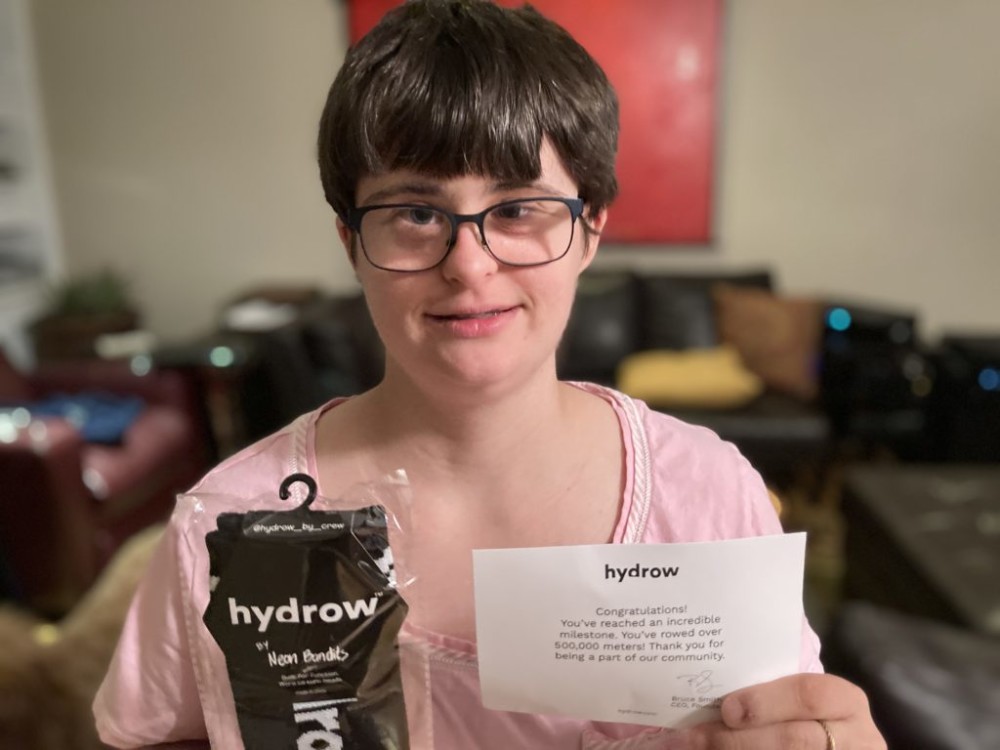 “Kids and young adults with Down syndrome or other special needs are really at risk. It's hard to get them motivated to exercise and stick with it, so they're at risk for weight gain and type two diabetes. The activity really needs to be a platform that's engaging, exciting, and keeps them plugged in. Hydrow has been a great fit in that regard.”

He also notes that Mara will pull ahead of him soon thanks to knocking out 45-minute workouts almost every day.

“She's plugging away at those 45-minute rows five or six days a week and logging about 5,000 meters each time. I passed a million meters last December, and she did the same about a month ago, but she's on track to pass me pretty soon.”

“Mara doesn't even need prompting anymore. She just gets dressed, hooks it up, dials in the row, and knocks it out. Sometimes she'll listen to the coach and follow the prompts. Other times she just puts her music on and just follows. But she really likes watching the music, the activity, the interaction. Oh, and she’s really into all things Disney. Disney music is motivating for her.”

“We need to get some Disney music rows on there for you, then!” exclaims Sera Moon.

The family appreciates how engaged and supportive the online community has been, too.

“One of the things I like about Hydrow is the really active community and Facebook group. I posted a little blurb about Mara recently. When she was about to hit a million meters, we actually held her off for two or three days to be able to do a Live Row so she could get a milestone shoutout from Mike Dostal, who we love.

“That Live Row got cancelled due to poor weather, so Mike ended up sending over a quick video shoutout. He was just so gracious to do that. So we filmed her watching his video shoutout, and I posted it in the Hydrow Facebook group. It kind of went viral.”

Robert credits Mara as being a source of inspiration for both himself and others.

“I'm really so impressed by Mara. She doesn't quit. When she's tired she just keeps pushing through. I think there's a lot about the Hydrow ecosystem that provides healthy distractions and enables you to put in the extra effort.”

“She reminds us that you can push your boundaries and go beyond what you thought you could do.” 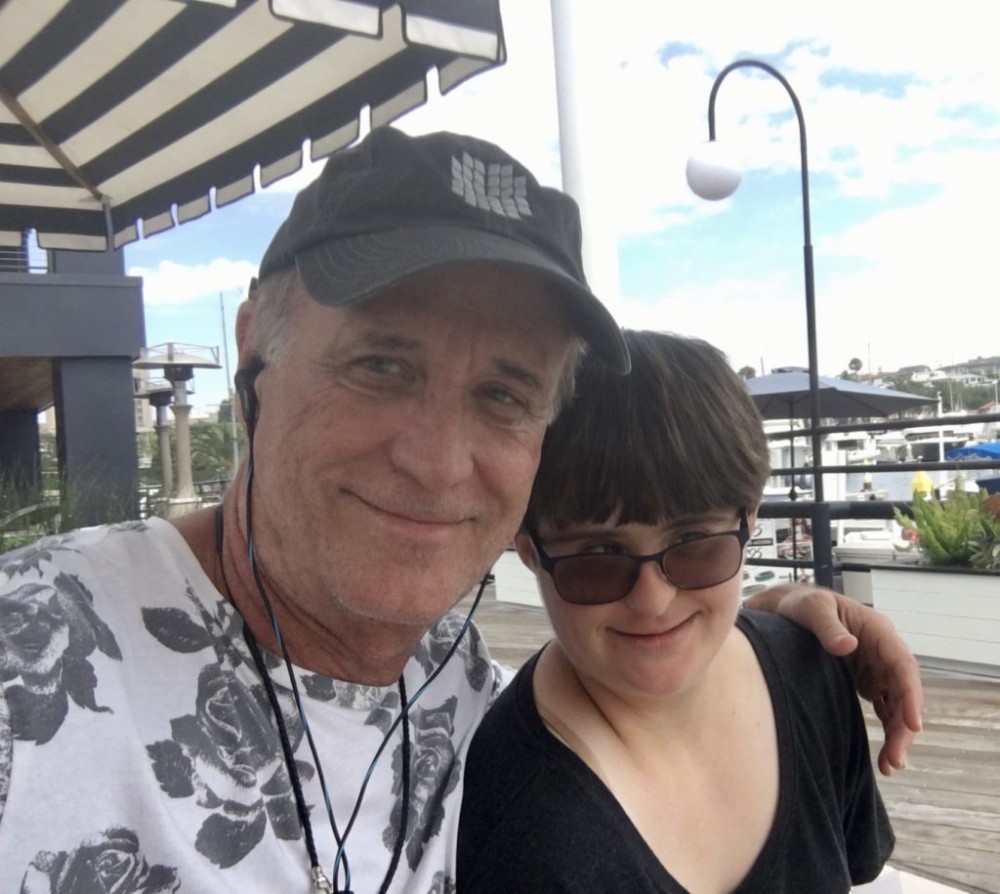