During the fall of 2020, Hydrow launched Private Coaching: 30-minute virtual one-on-one coaching sessions that provide Hydrow members with customized, individual coaching to reach their fitness goals. Private coaching is offered to all Hydrow members — from beginners to advanced rowers.

Hydrow workouts are an efficient and effective way to build and maintain fitness through both cardio and strength, and private coaching sessions help members maximize those benefits.

We followed a Hydrow member who went through a Private Coaching “Three Session Package”- 3 sessions over the course of four weeks, to see how individual coaching changed her Hydrow experience.

Megan Choi is finally making time for herself and setting an example for her kids. Between two young children and a growing career, time for herself is precious. Megan had always seen indoor rowing machines at the gym, but never tried them during her previous gym membership.

“They were intimidating, and no one was ever using them!” she says.

After the pandemic changed her lifestyle last year, Megan was spending all of her time at home. Megan’s original motivation was to start exercising for herself, but in lockdown she realized she also wanted to set an example for her kids and show them that fitness was a priority.

“I do a lot for my kids, and I asked myself, ‘What do I want my kids to see?’” Megan started researching the best at-home fitness options. She thought about her big picture goal of better health when making her decision. “I needed something efficient. I don’t have a lot of time during the day, and I liked the whole body aspect of rowing.”

Megan ordered her Hydrow in November 2020. When it arrived in early December, she took two important steps to ensure long-term success: She completed the Learn to Row program and joined the Hydrow Training Camp Facebook group. There, she learned about the Beginner Training Camp and started it right away.  To measure her progress during the Beginner Training Camp, Megan completed Hydrow’s 5-minute assessment at both the beginning and end of the program (to find this in Hydrow’s Library, filter for “5-minutes” and “Drive”). She improved her 5-minute assessment by 4 seconds in the six weeks between the assessments. Feeling great about her progress, Megan set a goal to reach the 250,000 meter milestone on Hydrow by early February, around her birthday.

As a working mom, Megan needs her workouts to be efficient and effective. When she was finishing up the Beginner Training Camp, she saw Private Coaching mentioned in the Facebook group.

“I thought, if I already made the investment in the Hydrow, then why not invest in private coaching and have an expert take a look at things and make sure I’m being as efficient as possible?”  She chose the three-session package with Megan Hanewald, and had her first session in late January 2021.

Connecting via video conference call, private coach Megan Hanewald identified a few drills that Choi could benefit from right off the bat.

“When Megan Choi came to us, she was not sure if she was rowing correctly. She wanted to make sure her rowing was as efficient as possible and would keep her injury-free.” In order to get the most out of her rowing stroke and be able to work out her core, Hanewald introduced the “pick drill”, a series of drills that emphasize arm and core preparation after the finish of each rowing stroke.  Since Megan opted for the three-session journey, Hanewald was able to assign her “homework” between sessions: Every time she did a Hydrow rowing workout, she practiced the pick drill for 5 minutes as a warmup. (Check out Laine's 10-minute “Pick Drill Warmup'' from 1/31/21 to do the same warmup).

In their second session, Hanewald checked in on Megan’s progress and worked with her on reinforcing the drills from her first session. They focused on engaging the arms and core at the end of each rowing stroke.

Hanewald then worked with Choi on finding the next level in terms of her ability to find more power and drop her split with patience. They also touched on drills to build a strong core by finding the one o’clock core position at the finish and the 11 o’clock position at the catch.

Megan was thrilled to report her improved assessment split, so her third session was spent working on finding more power in her rowing stroke. The two worked on legs-only rowing so that she could find the most effective workout possible. They also focused on quickly pressing off with her feet and feeling for power through body positioning.  Hanewald noticed Megan losing a bit of efficiency in the way she was setting up for each stroke, and helped her with a simple correction — pivoting her core and shoulders to an 11 o’clock position on the recovery to get the most power out of every pull.

After her private coaching sessions, she dropped her average split for the 5-minute assessment by 7 seconds.

What Is Megan Doing Now?

After Hydrow Private Coaching, Megan is confident she can get the most out of any workout on Hydrow. To give her kids a chance to participate in her workouts, she lets them pick her workout from the library screen, because at the end of the day she’s not only rowing for herself, but also setting an example for her family.

She makes sure to do a 5-minute warm up focusing on the techniques that she learned from  Hanewald in her private coaching sessions, and always adds on a cool-down after her workouts.  When asked what Hydrow and Private Coaching have meant to her, Megan says, “At this point in my life, my favorite mantra is ‘You can be a masterpiece and a work in progress at the same time.’ I want my kids to have the childhoods they deserve, and I don’t want to sit on the sidelines for their lives or mine.” 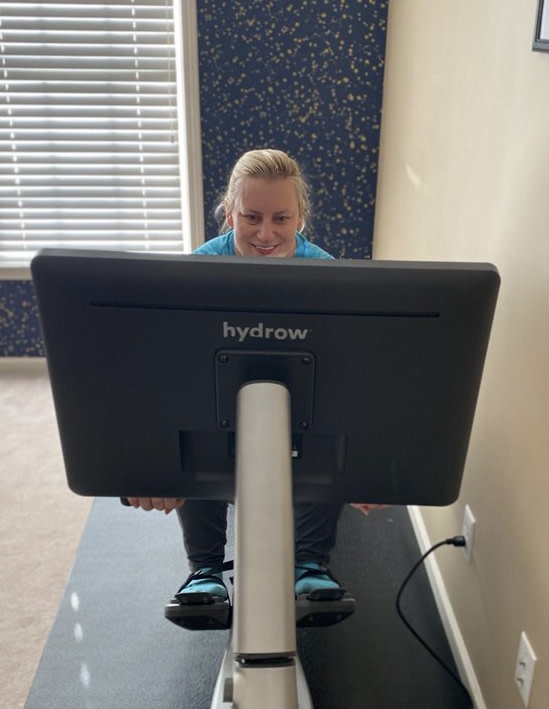 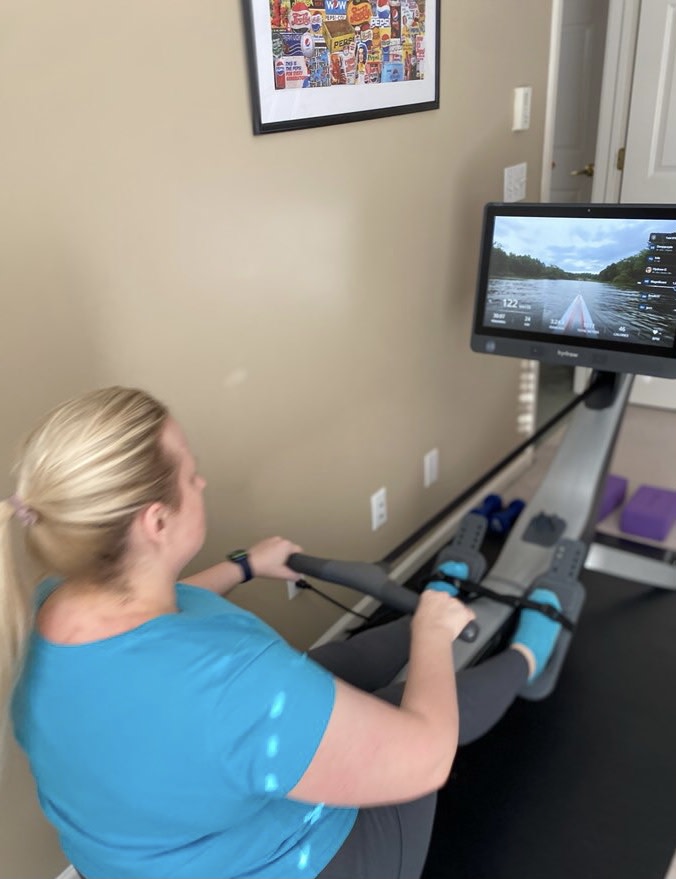 Follow Megan on Hydrow: Username: Megnificent. Sign up for a single private coaching session or a 3-session package here.