As a professional snowboarder, you can find Madison Blackley training for competitions year-round. Due to limited snowfall this past season, Blackley found it particularly difficult to find time to train on the slopes. So she opted for the next best in cross-training: her Hydrow rower.

Born and raised in Park City, Utah, Blackley has been snowboarding for 24 years. Inspired by her father, who was an avid snowboarder in the 80s, she has spent as much possible time on the slopes. As her professional snowboarding career took off, she realized additional year round training would be essential.

In 2021, Blackley was the first female snowboarder to win the title of the Redbull Kings and Queens of Corbet’s Skiing and Snowboarding competition. This year, Blackley is going back for another opportunity to defend her title as she competes from February 11-18th.

Hydrow Athlete Sera Moon and Madison connected over email to discuss her most recent season, upcoming goals, and how Hydrow has benefitted her cross-training needs.

Sera Moon: When and why did you first start using a rower to cross-train for snowboarding?

Madison Blackley: A few years ago I joined a crossfit gym, solely because it was a 30 second walk from my house and could always hold myself accountable to show up. I enjoyed the strength training but loathed the running, and would always make sure to avoid those days and show up to the days that incorporated rowing instead. The snow is soft and the pavement is hard, my legs appreciate the low impact of rowing while getting strength and cardio from it.

Sera Moon: Why is it important to cross-train?

Madison Blackley: In snowboarding, especially the type that I do, injuries are part of the game, it’s not a matter of when you will get hurt, but the severity of it. Cross-training not only helps me minimize the risk of serious injury, but also helps me get back to 100 from when I do get knocked out.

It’s pretty rare to go a whole season without having to sit out a couple weeks here and there, it happens to everybody if you are pushing the sport enough, but I want to make sure that I can build my strength back up as soon as possible. We don't have a whole year with this sport, we only have the winter season so time is always limited.

Sera Moon: What keeps you motivated to keep training?

Madison Blackley: If I’m not enjoying it mentally, then I shouldn't be pushing myself doing it physically. You perform the best when you’re having fun and although sometimes it might be mentally difficult to start, once you do and can get in the zone, it calms the mind and lets me organize my thoughts to motivate me for the real reasons I’m training: for the actual snowboarding!

When I’m on my Hydrow, I find an Athlete to match my mood for the day, I turn that music up REAL LOUD, and set a nice reward for after. Whether that be a good meal, a night out with friends, or a reason to binge watch movies all night. I love that you can set up teams and race against others with the Hydrow, good fun competition, and sometimes some inside joke bragging rights after.

Sera Moon: What is it about Hydrow that sets it apart from other rowers or other methods you’ve used for training in the past?

Madison Blackley: I honestly need some form of competition or encouragement to work out or else I won’t do it. I love the live aspect of the rows, it resonates with me as an outdoor athlete. I’m always trying to better my last moment, while also actually feeling as if I am outside, actually on the water, rather than just sitting on a rower doing an indoor workout.

All of the Hydrow Athletes make me feel like I'm truly rowing with them in beautiful places. I feel like I can really get to know the Athletes through the rows, they all have different strengths to offer. Some days I'm looking to get my blood pumping and then other days I'll choose an Athlete that has my same taste in music. But Sera, you have the best of both of those, the good sweats with some of the best playlists to keep it fun and motivating!

Sera Moon: What are some of your proudest accomplishments and achievements as an athlete?

Madison Blackley: Most of my career has been surrounded by filming. In 2016, I received a nomination for Rookie of the Year, followed by a 2018 nomination for Video Part of the Year.  I have always loved big rails jams and slopestyle contests and won Bear Mountains Hot Dogs and Handrails 3 years in a row. More recently, after breaking into the powder contest scene, I won the title of Queen of Corbet’s Couloir in Jackson Hole which is a whole new realm of competition. Skiers vs. snowboarders and zero practice on the course, all on live TV.

Sera Moon: What are your upcoming goals for 2022?

Madison Blackley: I am headed back to compete in the 2022 Kings and Queens of Corbet’s Couloir in February! I’m praying for deep snow and sunny days and would love to put down a run I can be proud of. I am also working on a snowboard film project with a good friend who I will also be competing with, and we hope for a long season ahead of us.

Sera Moon: What would you say to the aspiring athletes reading this who want to take themselves to the next level?

Madison Blackley: Invest in yourself and your body. You only have one and it can take you to all the places you want to go, and the more you invest in it, the outcomes you seek will come more quickly and easily than you expect.

Madison Blackley: Support brands who support athletes of all types and all genders, Hydrow is a leader and is doing a great job with this!

Be sure to follow Madison on Instagram and on-Hydrow @madmads.world to keep up with her latest accomplishments both on and off her Hydrow! 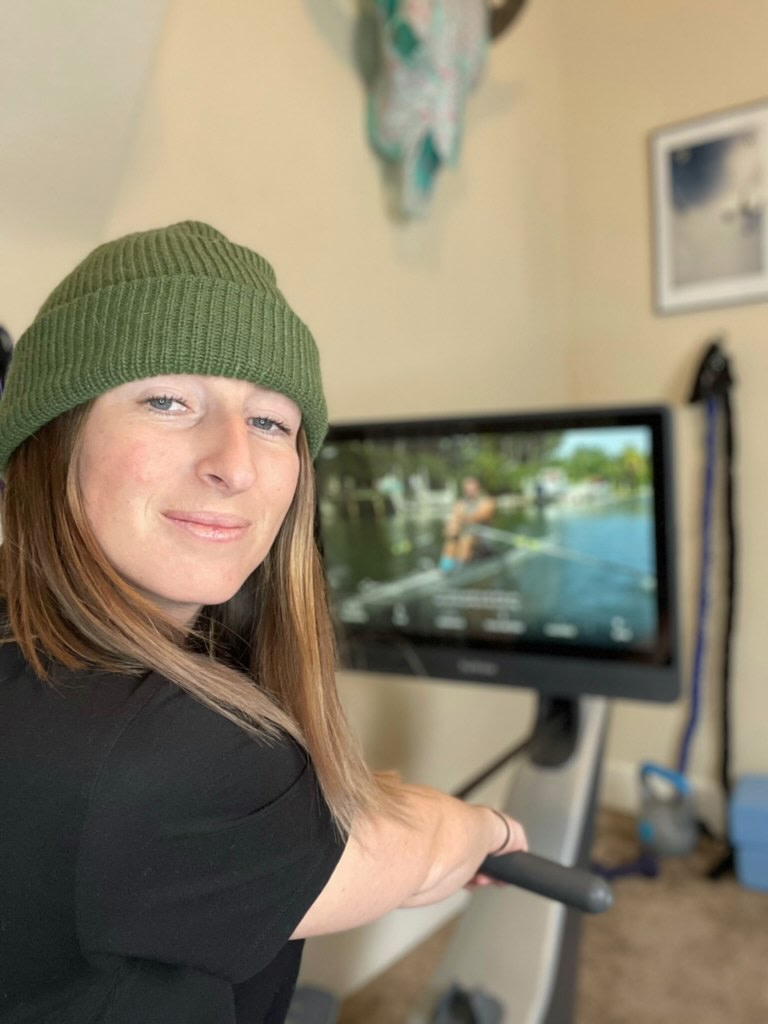