Ruth Moskowitz grew up as an athlete. Even after having her first daughter in 2015, movement and fitness remained an important outlet for her.

“I played soccer in college. Sports were a huge, huge part of my life for a really long time,” she says. “Even after having my daughter, I was working out pretty intensely. I was going to CrossFit almost daily and loving it; I was feeling really great.”

One day in April 2016, however, Moskowitz noticed some tingling in her hands. She had lost sensation in her fingertips, and wondered if she had a slipped disc..

“The tingling and numbness continued to spread. Something had gone wrong, but the pieces weren't really adding up. A couple weeks later, I went down to visit my parents; I leaned back against a couch to pick up one leg and put on a sock, and I fell right over.”

“I went to see a neurologist. By the time I got my diagnosis – April 29th, 2016 – I was completely paralyzed from the shoulders down.”

Moskowitz was diagnosed with Guillain-Barré syndrome, an autoimmune condition in which the body attacks its own nerves and brain. She was immobile but ready to put up a fight. She sat down with Hydrow Athlete Sera Moon Busse to share her story of learning to walk again.

“I'm stubborn – I didn't want to go to a doctor at all,” recalls Moskowitz. “I was working a lot; after I had gone to the doctor and gotten the tests, I headed back to the office.”

“I was getting some water in the office kitchen and I couldn't pick up the cup and carry it back to my desk. One of my coworkers saw me and asked if I needed any help. I said I was fine and was just going to drink the water in the kitchen. Then I kind of bent my head down and dipped the cup up. The coworker stared at me and offered to carry the glass back to my desk, but only if I would call my doctor right then and there. So I picked up the phone.”

Despite atypical symptoms, the neurologist was able to identify Moskowitz’s condition as Guillain-Barré syndrome. He told her to meet him the next morning at 9:00am... in the emergency room.

“He said, ‘I want you to try and enjoy your evening,’” remembers Moskowitz. “He added, ‘Promise me you'll tie up whatever loose ends you have to do at work. Let someone else drive you home. I want you to go home and I want you to have a beer and sit with your husband and your daughter and just try to enjoy the night. Promise me you won't Google this.’"

Moskowitz agreed. And while she kept her word and didn’t Google the condition, she knew her family was researching it in the background.

“I know that my husband was frantically researching details and not telling me what was going on. I also have a brother who's now a doctor but at the time was in med school. I think everybody kind of knew what it was, what it might be, and how a lot of people don't recover from this or they don't recover fully. I certainly can't attest to having recovered fully.”

Moskowitz says her journey has made her realize how important and valuable it is to have a support system.

“My husband, who works a full time job, had to figure out how to take care of a 15 month old while his wife was away for several weeks. My mom literally dropped everything and basically moved in with my husband to help take care of my daughter. My father-in-law drove an hour and a half every day to pick up my daughter from daycare and bring her to the hospital. I mean, it was just amazing how everyone came together.”

“That's just incredible, Ruth,” says Sera Moon. “I'm wondering what was going through your mind when you were first getting that diagnosis? It sounds like you had a really great support system but I'm sure you didn't know right off the bat that everything was going to be okay. How did you get through those first steps?”

Moskowitz nods. “I absolutely had my low points where I was bawling my eyes out and I couldn't wipe my own eyes with a tissue and I had a nurse sitting there drying my tears literally.”

“I think knowing how many people were rooting for me and cheering me on was a huge help. Also, there was the desire to hug my daughter again. My test before I was allowed to leave rehab was to pick my infant daughter up and take 20 steps while holding her. I can't tell you how many medicine balls I dropped in the weeks that I was in rehab.”

“In addition to this whole process, I had turned to food to cope. And I gained, I don't know, 60 or 70 pounds. I couldn't really control my body, but I could control and enjoy eating something delicious. I always wanted to get back into sports in some way but running up and down a soccer field wasn't really an option for me.”

Finding Hydrow – and a coach

“At what point did Hydrow enter into your life?” asks Sera Moon.

“Running wasn't really for me, I tried going back to CrossFit and got hurt. After my second daughter was born in the midst of the pandemic, I needed to do something from home. My uncle, who is on the water all the time, suggested I try rowing.”

“So it's been 32 weeks with the Hydrow. I learned to row and I was like, ‘Oh, I like this. No pain. Good workout.’ I did the Beginner Training Camp, then I think the Sprint Training Camp so then I wanted to get faster. What I realized pretty quickly is that rowing can be a challenge for someone like me who’s an over-analyzer and overthinker. There are so many things to think about!” “I signed up for Hydrow Private Coaching with Ana and we clicked. What she really has given me is confidence. I don't overthink things anymore because she's given me the reassurances I need to keep going and tune out those voices. I've never rowed before and I've never had a coach, so I didn't know what I was doing at first. I can't tell you how many YouTube videos and Hydrow promos I’ve watched to try and catch exactly what's going on and make sure I'm doing it right. Private coaching is so much fun.”

To commemorate five years since her diagnosis – and losing over 50 pounds since her rehab days – Moskowitz is aiming to join the Million Meter Club.

“I don't know if it'll be the 28th or the 29th that I'll hit my millionth meter. I have about 6,700 meters a day to go to hit it, but it's doable and exciting,” she says. “I really feel like I've come out of this stronger, better, and much less judgmental. I've learned that you never know what someone else has been through.”

Moskowitz also says she’s a lurker in Hydrow’s Facebook groups and loves them.

“I've started to engage with the Facebook page and community a little bit more. I haven't posted anything, but I like reading about people and what they're doing. You get to read about people who are just starting out on their journey and you're like, ‘Oh, I remember when...’ And so that community has been amazing. I feel better, I move better, and I'm excited, so when I see people posting about their excitement and their Hydrow and everything else, it's really cool.”

As Moskowitz gets ready to tackle her next million meters, she acknowledges how important it is to appreciate your body and everything it can do.

“Part of loving your body is that exercise component. It's feeding it properly, it's taking care of it and not taking it for granted.” 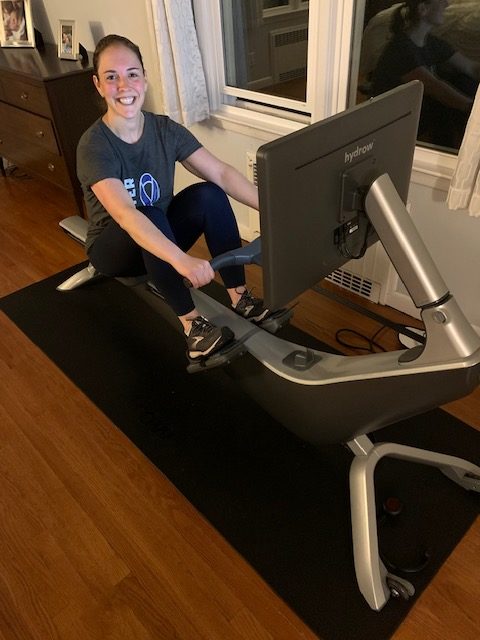 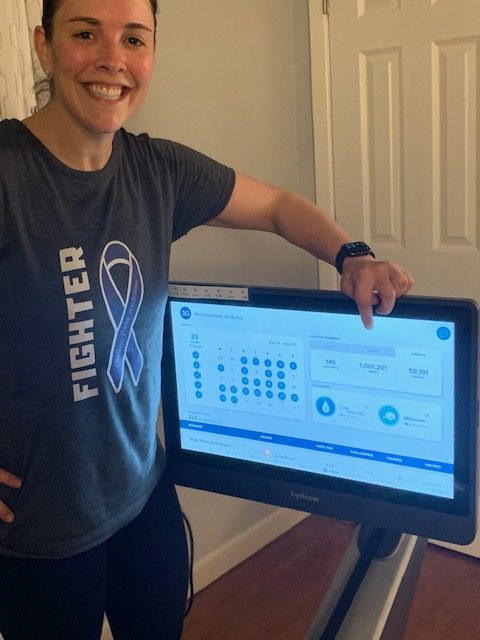