Athletic genes run in the Maher family. Toughness, strength, perseverance, humility, grit, and a love for sports are all traits that are shared by Hydrow Athlete, Laine Maher and her grandfather, former NFL standout, Bruce Maher.

As a formidable athlete, Bruce Maher had a ten-year career in the NFL, starting in Detroit for the Detroit Lions and ending his career in New York for the New York Giants. His coaches and teammates have said that he is one of the “toughest competitors” that they have played with. This strength was reflected in his personal life as well -- his kindness, wit, and love made him the rock of the Maher family.

We asked Laine what she does during moments when she’s feeling fatigued or questions her ability to keep going. Here’s what she said:

My lifelong mantra has always been “Keep the Faith.” It was passed down to me by my grandfather who was (and is) my all-time hero. He always said that to us whenever we were preparing for a competition, when we were faced with tough life challenges, or even just ending a conversation on the phone; and that always stuck with me. No matter what it is, keep YOUR faith… because that's what drives you. Your faith allows you to keep confidence in yourself, your goals, and inspires you to grind every single day.

My grandfather played in the NFL for 10 years as a two-time MVP, played a year of minor league baseball for the Detroit Tigers Class B affiliate, and continued to be very active all throughout his life until he passed away two summers ago. He held sports, being active, and family to the utmost importance everyday. I can remember him telling me that whenever he was traveling for games, he would hold his abs, and clench them the entire trip so he wouldn’t miss out on any training opportunity. I think one of my favorite memories was when he asked me to teach him how to row. We went to his gym, he sat down on the erg, still wearing a leather jacket, and saying, “I’m not sure I’m doing this right” the entire time.

For 20 years, he was fighting two types of cancer, but he never lost his exercise routine, and was always fighting to “Keep the Faith.” Until the very end, that’s what he was doing -- finding the strength to keep faith in his life through family, exercise, and fun. I ran the Boston Marathon this past year with the Dana Farber Cancer Institute in his memory, with the words “Keep the Faith” on my chest. It was one of the most meaningful races of my life to be able to fundraise solely for cancer research, train incredibly hard, and run in memory of someone I looked up to so dearly.

No matter what's going on in your life, Keep the Faith. Work to stay even stronger when the going gets tough, and lean on those that mean the most to you.

Tackle each day with grit, appreciation, and vigor; Keep the Faith. 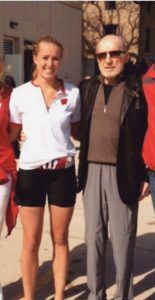 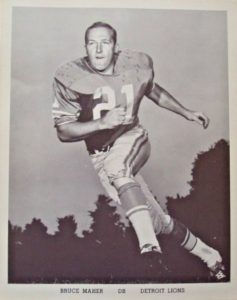